Here is the Mayo Clinic’s definition of Scoliosis:

“Scoliosis is a sideways curvature of the spine that occurs most often during the growth spurt just before           puberty. While scoliosis can be caused by conditions such as cerebral palsy and muscular dystrophy, the            cause of most scoliosis is unknown.”

Most cases of scoliosis are mild, but some children develop spine deformities that continue to get more severe as they grow. Severe scoliosis can be disabling. An especially severe spinal curve can reduce the amount of space within the chest, making it difficult for the lungs to function properly.

Children who have mild scoliosis are monitored closely, usually with X-rays, to see if the curve is getting worse. In many cases, no treatment is necessary. Some children will need to wear a brace to stop the curve from worsening. Others may need surgery to keep the scoliosis from worsening and to straighten severe cases of scoliosis.

Signs and symptoms of scoliosis may include:

If a scoliosis curve gets worse, the spine will also rotate or twist, in addition to curving side to side. This causes the ribs on one side of the body to stick out farther than on the other side.

Doctors don’t know what causes the most common type of scoliosis — although it appears to involve hereditary factors, because the disorder tends to run in families. Less common types of scoliosis may be caused by:

Risk factors for developing the most common type of scoliosis include:

While most people with scoliosis have a mild form of the disorder, scoliosis may sometimes cause complications, including:

Again here are some links that will take you to sites that have more in depth information on Scoliosis. 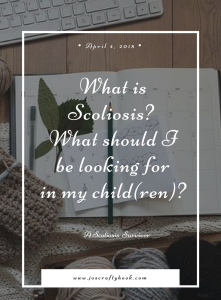 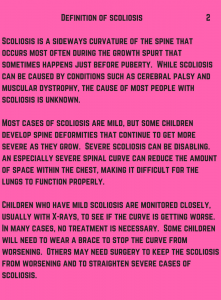 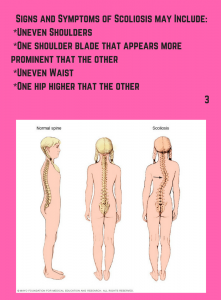 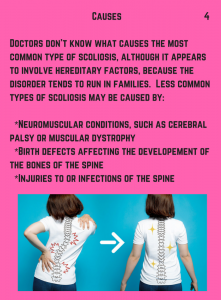 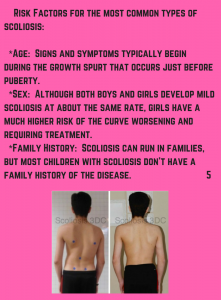 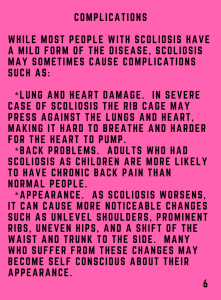